This is my homeless... I mean blog less friend Kami. She is a lurker, but just refuses to enter into the blog world... HOWEVER, I have gotten several emails telling me stuff that was more than blog worthy! Maybe she is practicing on me!?!? I really liked the stories myself especially the one about Parker peeing on the carpet.. you would THINK she would put a diaper on a child that is only a little over a year old wouldn't you!?!? Hum, too bad that she does not have a blog to DEFEND herself! LOL I think she is on the verge of blogging due to a very close family member possibly relocating so we will see. I will link her if and when she gets off her tail and does so! It is like she is on the side of a cliff.. maybe I will just stop by her work today and just PUSH her off the cliff. Or better yet I could start her blog for her considering I have just the picture to do that with DON'T I KAMI!?!?! Hee Hee 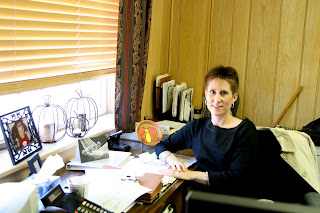 Here is Kami's fall swap gift. It is from Grammy who is also blog less, but she is a lurker because of me and her daughter and her family that live off so she has to keep up with them! 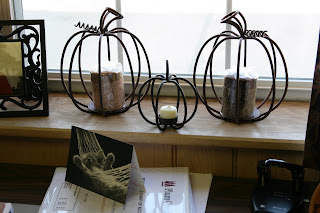 Grammy is very sentimental.. she bought Kami a daddy pumpkin, a mama pumpkin and a little Parker pumpkin... Kami has decided to start getting more fall decorations so Parker will be able to enjoy them growing up.. just think if Kami actually HAD a blog she would be able to show her precious Parker of.. but NOOOOOO! I wish you could see the candles better because they are glittery at the bottom.. the candles are in the brownish family.
Posted by RADstitches at 8:37 AM

Super cute stuff. And I so would like her to blog!! We need more blggers. I don't have quiet enough. Only like 100 that I read daily.

super cute and she is a great swap partner! thanks again, kami!! i can't thank you enough...love it! :) haha

C'mon, Kami....jump, jump, jump!!! lol You'll love the blogging world! Look at what a great job RADstitches does. :o) Besides, sounds like you need to defend yourself!

Love the candle holders. What a great idea to have the swap...I'm on board for the next one!

Let me defend myself...Parker's bottom was a little red and I decided after bath time I would let her "air" a bit...to my surprise she pee'd in the floor...

As for the blog...I am still thinking about it...my brother and family may be moving and this will be a way for them to watch Precious Parker grow..I will hate to see them leave BUT life has thrown them a curve ball...do what you have to do.

Mom of these kids said...

That's cute, and so was Heather's stuff. I would have loved to have done this, but just knew I couldn't get my act together.